Sean Taylor is an award-winning writer of stories. He grew up telling lies, and he got pretty good at it, so now he writes them into full-blown adventures for comic books, graphic novels, magazines, book anthologies, and novels. He makes stuff up for money, and he writes it down for fun. He’s a lucky fellow that way.

What is your current release and (without spoilers) tell us about the new book or series.

My newest upcoming release will be the second volume of The Ruby Files from Airship 27 Productions. It’s a collection of novelettes featuring private detective Rick Ruby, a character created by Bobby Nash and me. Rick’s obviously a throwback to classic P.I.s like those created by Chandler and Hammett, but also the TV detectives like Richard Diamond.

My particular tale for this volume puts Rick in the middle of what seems to be a racially motivated murder with a clear-cut killer, thanks to visiting members of the Klan. But as Rick begins investigating the murder as a favor to his black lover, something doesn’t feel right to him about it, and it could be that someone is casting the bastards of the Klan in the convenient role of patsy.

What is the usual process for your writing? Are you a plotter or a pantser?

It depends on what I’m writing. Anything that is a scene type of story (short stories and short shorts) I tend to pants when writing. Anything that requires a plot that connects multiple scenes, I NEED to plot. For longer works like novellas and novels and comic book scripts, I do not only plots, but full plots. I do everything from page breakdowns to throwing in bits of dialog that I want to be sure not to forget.

Once you have an idea that sparks your imagination do you research your idea or do any world-building exercises, or do you just begin to write and see where the Muse takes you?

Much of the writing I’ve done comes complete with pre-made worlds in that I’m either writing characters and worlds already remembered nostalgically by fans or I’m being paid by a publisher to play in some other creator’s playground (a la the Gene Simmons line of comics). When I do get to craft with my own clay (so to speak), I begin with character first. I prefer to let the world develop around my characters. I do, however, in the midst of my plotting (see response above) tend to create the world as I build that plot document.

I used to be a full time writer, and I did it as long as I could afford to do so. But bills will take precedence, so I had to go back to a full-time job and write as a part-time one. But that’s the difference between writing before and writing after. Before I wrote in my spare time. Now I write as a part-time job. That’s means I put regular hours into and devote myself to those hours. It takes a dedication whether part or full time.

I write at Starbucks. Well, I write BEST at Starbucks, I should say. I can write just about anywhere as long as I have my laptop or tablet with me. But because I can simulate the office experience at the ‘Bucks, I prefer to write there. What I mean by that is I can block off the sound and “be alone” in the crowd, or I can stop working for a few minutes to shoot the breeze with some of the baristas. I get the full office experience, from the locked door to the water cooler chit-chat. I’m ADD, so I need the constant change of both.

When I sit down for a writing shift, I go into it with a word count goal in mind and try not to stop until I hit it. I try to keep it within the realm of possibility though. I mean, sure, I can knock out 5,000 words in a sitting if I don’t care what I’m writing, but to turn out something that it salvageable by a good edit, I should probably plan somewhere in the territory of 2,500 words.

Can you tell us about your publishing experience? Are you Indie, Traditional, or do a bit of both?

I’ve have published one book independently, my collection of early writings called Gomer. But I prefer to work with established publishers. I’ve been lucky enough to work with both small and mid-level prose publishers, and I’ve only had good, solid, enjoyable experiences with them.

I think I write better when I know I have a team that has my back when it comes to editing and publishing. Writing is my strong suit, though I have been on both sides of the publishers’ desk. I don’t mind running the show, but it’s so much more enjoyable for me to just write, edit, and send it off for someone else to make it look pretty.

Everyone likes to know where an author gets their ideas from, but what I want to know is—what is the strangest thing to inspire one of your stories?

I have two. One is from a drive to a convention. I suddenly, and still don’t know where this came from, had the thought: “Wouldn’t it be cool if the mirror from Alice Through the Looking Glass and Snow White was the same mirror?” From that stray thought came my story “The Fairest of them All: A Symphony of Revenge” from IDW Publishing’s Classics Mutilated (later reprinted in Required Reading Remixed Volume 2 from IDW).

The other is from a get-together for writers and artists. I happened to be wearing a shirt that had the lobby art for the movie Hot-Rod Girl on it. Well, a friend walked up and asked me if that was for the next comic book project I was working on. I thought for a moment, put together a full plot in the time it took to look down at the shirt and back to my friend’s face, then said, “Yes. Yes, it is now.”

Can you tell us about some of your other writing (fiction or nonfiction) and any appearances or signings that you have planned?

I feel like lately I’ve become almost exclusively a new pulp writer, with trips into the adventures of private detectives, masked heroes like the Black Bat and Golden Amazon, and pilots like Lance Star. I’m really looking forward to hitting some of the other kinds of stories that I enjoy. What’s coming up around the corner are my first finished novels – one for my new subdivision with one of my regular publishers that will be for more extreme action adventures like those from men’s magazines and the sixties. Then, in addition to that, I’ll also be tackling my first YA urban fantasy, about a teenage boy in love with a true force of nature (and that’s not a metaphorical descriptor). 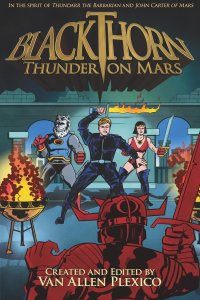 As an author what inspiration or advice would you give to a writer who is working to make the transition to Author?

I would give this advice: Dream big, and learn to network.

Dreaming big gives you almost unattainable goals. Learning to network with other writers, publishers, artists, readers, librarians, booksellers, etc. will teach you what you need to know to read them and make them far more possible and attainable.

Who is your favorite author? Tell us what makes this author stand out in your mind, and what book would you recommend to someone new to that author?

I used to have a single favorite author – C.S. Lewis, and he’ll always be my first-step inspiration, but my writing and reading world expanded beyond him to writers who have actually had far more influence on me now than Lewis ever did. Now, I look to Ernest Hemingway, Raymond Chandler, Zora Neale Hurston, Edgar Rice Burroughs, and Flannery O’Conner for the folks I prefer to read and who are responsible for who I am as a writer.

As for recommended works from them all:

If these are the only books you ever read, you will still be able to say you’ve experienced a full life of written love, romance, horror, loss, pain, adventure, and beauty.

17 thoughts on “Interview with Sean Taylor — The Ruby Files”

© Lisa M. Collins and lisacollins.wordpress.com, 2016. Unauthorized use and/or duplication of this material without express and written permission from this site’s author is strictly prohibited. Excerpts and links may be used, provided that full and clear credit is given to Lisa M. Collins and lisacollins.wordpress.com with appropriate and specific direction to the original content.
Loading Comments...
Comment
×
%d bloggers like this: